Peel Region is located in Southern Ontario, on the north shore of Lake Ontario, between the City of Toronto and York Region to the east and Halton Region to the west. Peel is a part of the Greater Toronto Area. The Region has an area of 1254 square kilometres and is made up of cities of Brampton, Mississauga and the Town of Caledon. According to the 2006 census, 1,159,405 people live in Peel Region, in 359,040 households. Peel’s population grew 17.2% between 2001 and 2006. Peel had a total of 561,240 immigrants representing 48.4% of the region’s 2006 population. Mississauga’s immigrant population was 51.56%, the highest percentage in Peel. Just over 10% of Peel’s economic family’s were low income in 2006.

There arethree Area Municipalities in Halton Region. Each has its own website which can be accessed by clicking on the map or on the name of the individual municipalities. 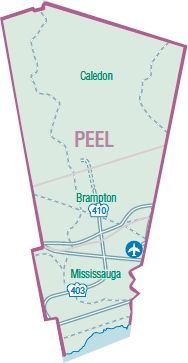 Town of Caledon
City of Brampton
City of Mississauga